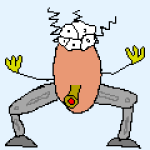 others will be described as they come out.